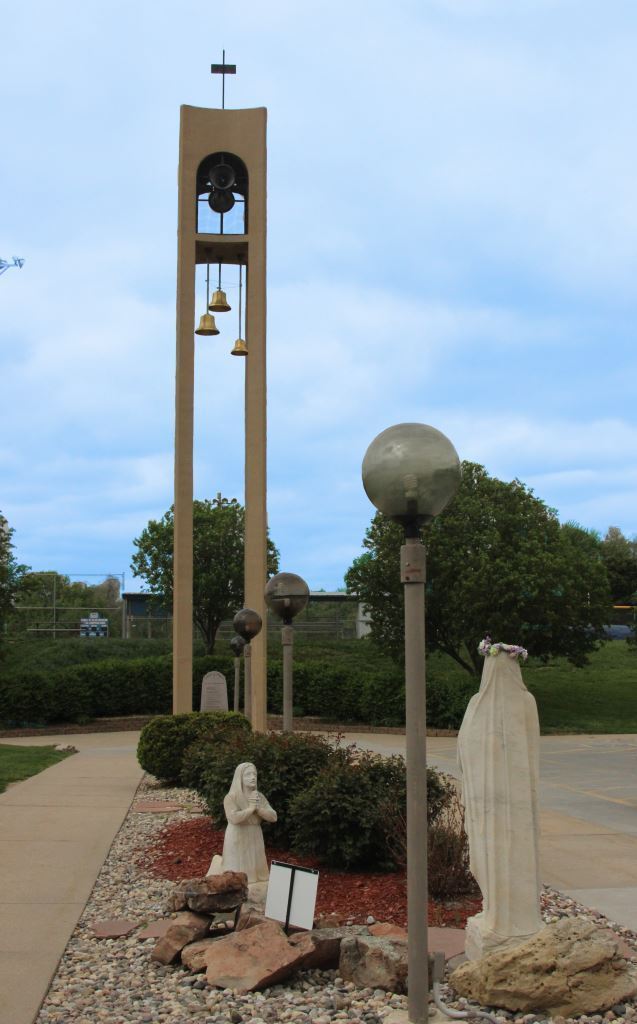 Omaha in 30 years.  Since there was no building in 1963, Father Mitera was told by Archbishop Gerald T. Bergan to purchase a home large enough to have Mass in the basement.  This home was located at 42nd and Valley View Avenue.  The area south and west of St. Bernadette’s was described as being “quite underdeveloped” at the time.  Likewise in 1963, the Altar Society and Holy Name Society were founded.

On May 8th, 1966, St. Bernadette Church was dedicated.  The building included a church with total seating capacity of more than 600 and a fifteen room school.  The dominant feature of the St. Bernadette campus was a freestanding bell tower of reinforced concrete that was 65 feet tall and topped by an eight-foot bronze cross.  Classes began in the five day school in the fall of 1966 with first grade.

The first Church festival occurred on July 23rd 1967.  In 1968, CCD was organized, with classes being held in private homes.  Classes were eventually moved to St. Bernadette’s school classrooms.

January 6, 1982 was a momentous day for St. Bernadette Parish.  Our pastor, Rev. Anthony Milone was ordained a bishop of the Church.  A number of Archdiocesan priests, along with parishioners, family and friends of Bishop Milone were present in Rome as Pope John Paul II conferred Episcopal ordination on St. Bernadette’s pastor.

The twentieth anniversary of the parish was celebrated in July of 1983.  A collection of memorabilia from the past 20 years was displayed in the social hall after weekend Masses with founding members of the parish serving as hosts.

The Parish celebrated its twenty-fifth anniversary with an outdoor Mass and an open house on September 11, 1988.

The altar and side areas of the church were redecorated and rededicated in 1990.  The main aisles were carpeted and a new baptismal font was added in 1998. New stained glass windows were installed in 2011.

The parish celebrated its 50th anniversary in 2013.  There was a special Mass on June 2013, offered by Archbishop George Lucas.

You are our future! Join in the celebration and help us write our future together. We need everyone to build this parish into a vibrant community where we foster relationships that will never end. Stay tuned for more about our future plans!

Past Pastors and Assistants